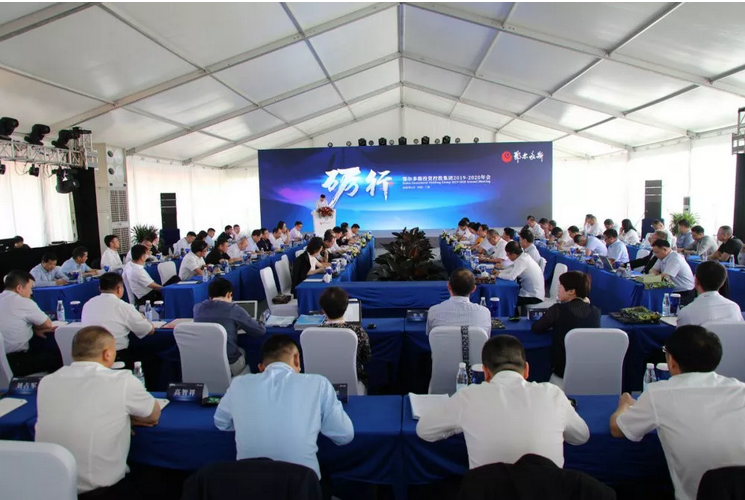 The 2019-2020 annual meeting of ERDOS Group was held ceremoniously in Sanya City on January 13, 2019, it gathered elites from all sectors of the Group, who reviewed jointly the working situation in last year and discussed future development plan. The meeting was chaired by Zhao Kui, executive vice president of ERDOS Group and attended by nearly 100 people， including Wang Linxiang, Chairman of the Board and president of ERDOS Holding Group and the other elites from eight head offices of the Group, cashmere and electro-metallurgy sectors, six Divisions and each subordinate enterprise.


As an important channel for wisdom collection and a high-level form of centralized decision-making in ERDOS Group, the annual meeting had been held successfully for 12 years since its system was formally established in 2006. It was proved to be an effective way for the Holding Group to perform its collectivized control and management function with the maturity of such system.

In the past year ， the market environment was complex and volatile, the industry trend went up and down. Under the correct leadership of the Board headed by president Wang Linxiang, ERDOS Group sought progress in stability according to predefined policy for its production management and gave full play to its competitive advantages, seized opportunity to take bold actions under the general keynote of intensive cultivation, lean management, reform & innovation, quality and efficiency increase and continuous improvement. With the successful implementation of cashmere industry revitalization strategy, further improvement of the industrial chain in electro-metallurgy sector, continuous promotion of the management ability and effective stimulation of assets in polysilicon industry and Sino-Mongolia Company, the business performance of the Group tended to be increasingly good, news of successes from all sectors were kept pouring in, the budget target and scheduled task was completed beyond each indicator and the overall operating performance hit a historical high.

The principal of each sector, Division and head office made working report respectively at the meeting and the working report of each unit was discussed on site. Over the past one year, the cashmere sector continued to stride towards revitalization, upgrading and showed a rising trend, many years of deep rooting and abundant accumulation had produced great energy and vitality, realized high-profile returning of cashmere industry.

At the meeting, the person in charge of each division of Erdos Resources Co. and Electro-Metallurgical Group summarized the work highlights and management problems in 2019, and reported on the overall plan, work priorities and continuous improvement in further 2020.